By request, I am sharing My Grandma Chie’s Ramen Recipe !

Her recipe is simple and healthy. And it’s super easy. You don’t need any experience nor skills. You just need a little bit of patience 😆

It always turns out tasty but the thing is, it’s NEVER as good as hers… I guess it’s a law of life!

*the amount really is depending on the size of the pot you use. Fill it up! 😆

CHA-SHU
(also the broth becomes the sauce for the soup)

**My grandma used to use “shoulder loin” for the Cha-shu. If you want a lean result, stick to my grandma’s recipe! Otherwise, you can use the head part which has more fat and it turns out juicier.

In the US, I used to get bones from Farmer’s markets (owned by Central/South-American folks or Asian peeps).

In Spain, I go to my usual butcher in the market but he doesn’t always have them. If he has them, I never know if it’s a beef bone or a pork bone. I prefer pork but, of course, “me shall no complain…” if he gives me a beef bone 😅. Chicken is sold separately from the meat shop so I ask for chicken bones at the poultry shop. 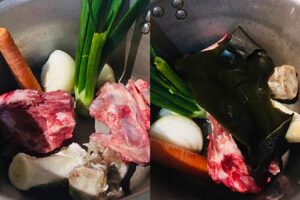 This time the chicken man gave me a quail bone instead of chicken bones…😅 Never be afraid to improvise!

Also, I sometimes throw in some Hueso salado (“salao”), Espinazo, or Costilla salada (“sala’a”)… They are salted and cured bones that Spaniards use to make Puchero (Spanish white stew like soup dish). I wash them beforehand to get rid of the salt and added to the soup pot.

Puchero is a bit similar to “Tonkotsu Ramen”. You can use the broth of Puchero and add soy sauce (or Cha-shu sauce from this recipe) and you can make your “instant” ramen soup! Another quick fix for ramen lovers 🤩 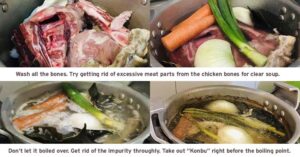 Remember：To make the soup stock transparent, don’t let it over-boiled (bubbled up)! The same goes for when you reheat the stock to prepare another bowl of ramen.

Now on to CHA-SHU

While cooking the soup stock, let’s make Cha-shu meat. This one is super easy, too. 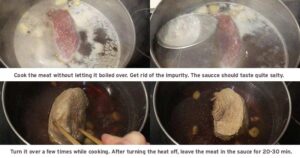 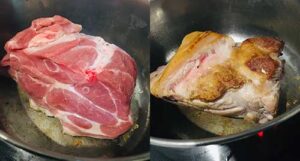 Sometimes I buy Chuleta (head part). *In this case, I sear the meat to seal the juice before adding water.

Remember：Don’t put the lid on while cooking! Once it starts boiling, taste the sauce. It should be quite concentrated and salty. Slice the amount of Cha-Shu you want each time you prepare a bowl of ramen (don’t have them pre-sliced).
Do you know “Otoshi buta”? It’s a loose lid that fits inside the pot. You can use an aluminum foil and make a hole in the middle to create one. Loosely cover the meat with it so that the steam escapes from the side and from the hole but the meat surface doesn’t get dried and the sauce goes around the meat evenly…

I often use angel hair pasta instead of the proper ramen noodles. In the US, it was easy to find the fresh (or dried) ramen noodles but here in Sevilla, I haven’t seen good Japanese-style ones. I have made them from scratch, too, but it takes lots of time and muscles 😅…

So let’s use this trick! I add baking soda to a pot of boiling water and boil the pasta. One of my Japanese friends gave me this idea and I am forever grateful to her!!! 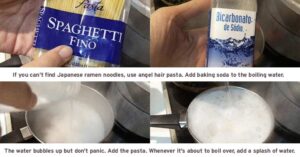 I think (!) baking soda makes the pasta surface a bit more sticky so the sauce/soup sticks to the noodles.  If you want to make “Yakisoba”, you could also prepare noodles using this process.

Toppings can be anything you like! I normally put: 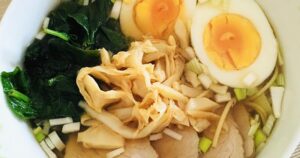 I hope everyone enjoy My Grandma Chie’s Ramen Recipe ! She loved cooking and feeding people 😆 so she’d have been very happy ✨✨✨

Please click here to support my blog for the ranking. Thank you / Gracias!

Please click here to support my blog for the ranking. Thank you / Gracias!

Receta! Ramen de Mi Abuela Chie 🍜
Which churros would you like? ✨